We have a version of AccountEdge Pro that works on Catalina and Big Sur (and Apple M1 chips) without requiring a virtual machine. Learn More.

Please visit our COVID-19 Resources page for useful payroll and reference information. If you are teleworking, check out Working Remotely with AccountEdge.

This support articles covers different errors that can occur when attempting to use Aatrix's Forms Viewer software from AccountEdge and how to correct these errors.

Some users have reported receiving this error when attempting to run and update the Forms Viewer software. This can occur for two reasons. The first reason is that the user is not logged into their Windows machine as an Administrator.

NOTE: We suggest that if you are going to attempt to do this you contact an IT professional. AccountEdge Technical Support is not able to assist with this process.

Cause:
This message is generated if the software is unable to create or write the AatrixConfig.ini file.

If a Mac user cannot tab through all the fields on a Payroll Tax form.

If Mac users call to report that they cannot tab through all the fields on the form (it will only let them go to the check box fields). It is because they have turned on full keyboard access (I am unsure why anyone would need this feature). This will only be a problem on forms with check boxes. You can correct the problem on their computer by doing the following:

The issue is that you are running on Mac OS X 10.5.8 on a PPC. Aatrix requires 10.6 and newer with Intel processors for e-File processing.

This message occurs when you attempt to open "Prepare Payroll Tax Forms", but the Forms Viewer software cannot be located.

Reasons for the message:

This can be resolved by uninstalling and then reinstalling the software or by copying the Forms Viewer folder from another version of the software and moving it into your current application. 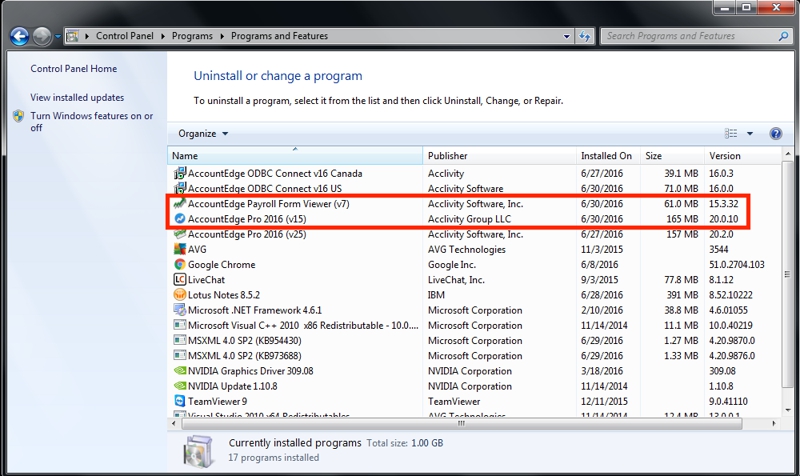 After uninstalling both AccountEdge and Payroll Forms Viewer you can reinstall the software.

For more detailed instructions on uninstalling and reinstalling AccountEdge please see this article.

Copying the Forms Viewer from Another Version

If you have multiple versions of AccountEdge you can copy the Forms Viewer folder from one application folder to another.

To do this on Mac:

To do this on Windows:

To be able to successfully update the Forms Viewer software - Forms Viewer must be installed properly and have appropriate access to the internet. This Aatrix support page has further information regarding the technical and system requirements for using Forms Viewer.

User's have reported an issue of receiving a Forms Engine Failure! error when attempting to open Forms Viewer on macOS 10.12 Sierra.

This issue can be resolved by moving the Forms Viewer software, running the update to it, and then moving it back to the necessary location.

You should then be able to launch Form Viewer from AccountEdge as normal.